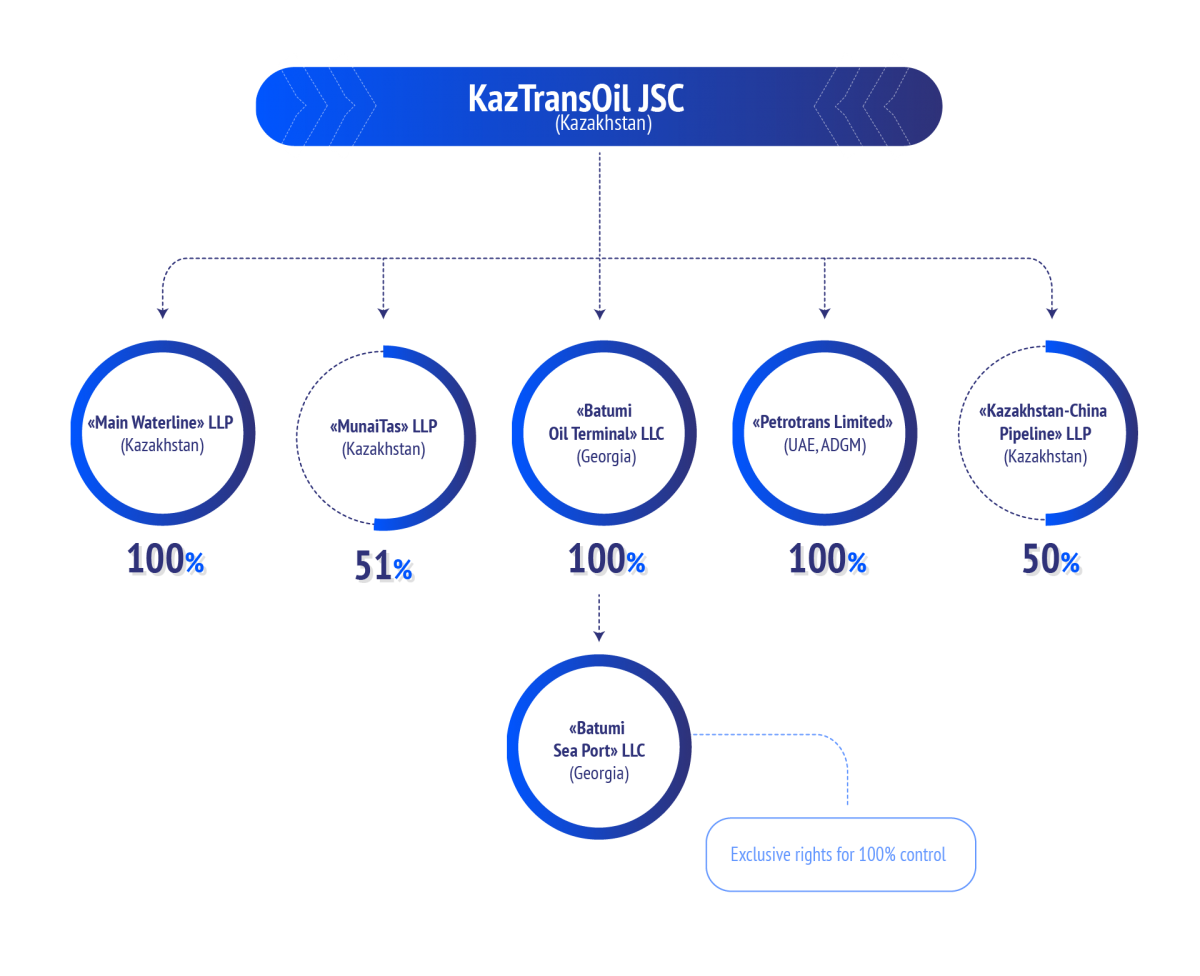 "KazTransOil" group assets structure
KazTransOil JSC (hereinafter referred to as the Company) implements measures aimed at alienating non-core assets and optimizing the structure of the Company's core assets within the framework of the Development Strategy.
Based on the results of the aforementioned reorganization of companies, a group of «Batumi Terminals Limited» companies was established, which included 4 companies: Batumi Terminals Limited (BTL, Cyprus), Batumi Oil Terminal (Georgia), which is the assignee of exclusive rights to the management of a 100% stake in Batumi Sea Port LLC, owned by the state (Georgia), Petrotrans Limited (British Virgin Islands) (hereinafter PTL).

Beginning from October 2015, to reduce management levels, the Company was undertaking the reorganization of the BTL group with the simultaneous liquidation of BTL. As part of the liquidation process of BTL in March 2017, the Company started directly owning 100% of PTL shares.

Due to the liquidation of BTL on August 22, 2017 registration changes were made in the Register of Entrepreneurs and Non-Business (Non-Commercial) Legal Entities of the National Agency of the Public Registry of the Ministry of Justice of Georgia, , according to which the owner of Batumi Oil Terminal LLC is currently JSC KazTransOil.

On November 26, 2017, Petrotrans Limited was re-domiciled from the jurisdiction of the British Virgin Islands to the special economic zone «Global Market of Abu Dhabi» of the United Arab Emirates. This economic zone is not included in the List of offshore zones for the purposes of the Law of the Republic of Kazakhstan «On combating the legalization (laundering) of proceeds from crime and financing of terrorism», as well as in the list of states with preferential taxation approved in the Republic of Kazakhstan.

Alienation of non-core assets of the Company is carried out in accordance with the decisions of the Company's bodies: The Company does not have any obligation to provide interested persons the documents legally translated into English or any other language. Documents posted on the website in English, are not legal translation.