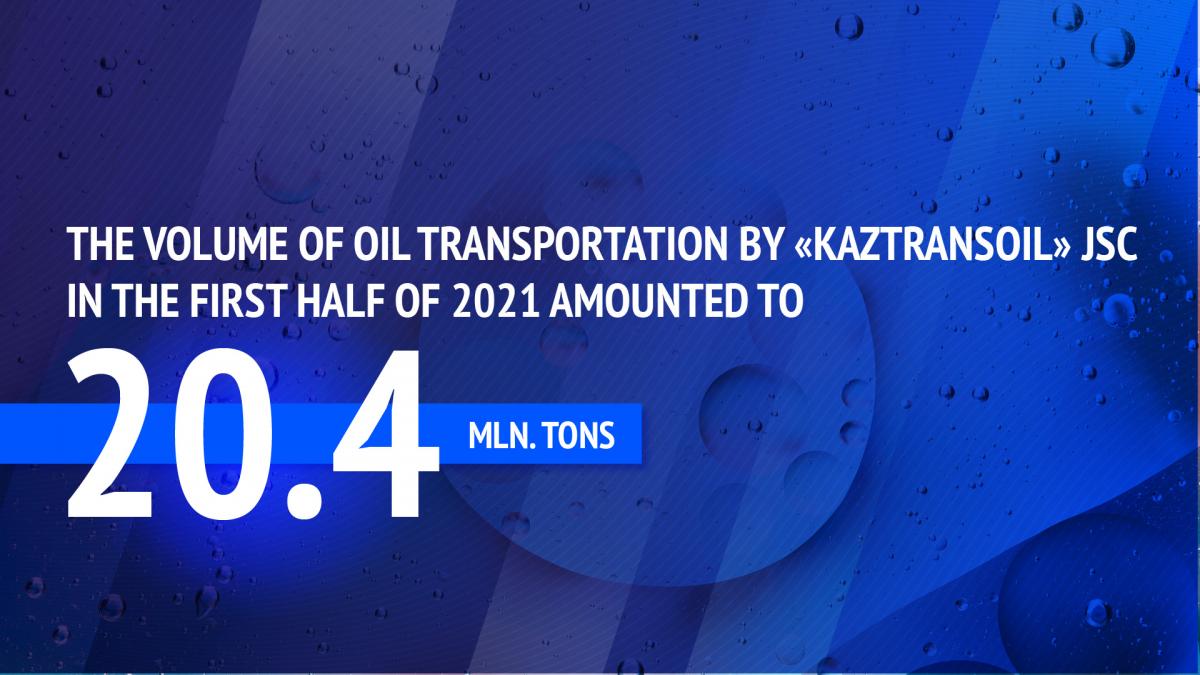 The volume of oil transportation by «KazTransOil» JSC in the first half of 2021 amounted to 20.4 mln. tons

Compared to the first half of 2020, the volume of oil transportation through the Atyrau-Samara section of the «Uzen-Atyrau-Samara» trunk oil pipeline decreased by 1 mln. 395 ths. tons and amounted to 6 mln. 258 ths. tons.

5 mln. 439 ths. tons of oil were transported through the section of the TON-2 oil pipeline located on the territory of the Republic of Kazakhstan, which is 8 ths. tons more than in the same period of 2020.

Transshipment of 5 mln. 453 ths. tons of oil to the Atasu-Alashankou main oil pipeline was carried out. Compared to the first half of 2020, the indicator increased by 87 ths. tons.

The volume of oil transshipment to the system of JSC «Caspian Pipeline Consortium-K» amounted to 267 ths. tons, which is 175 ths. tons less than in January-June 2020.

Filling of oil into tankers in the port of Aktau with the use of capacities «KazTransOil» JSC amounted to 1 mln. 53 ths. tons, which is 3 ths. tons more than in the first half of 2020.

The volume of oil transportation through the «MunaiTas» LLP oil pipeline amounted to 1 mln. 919 ths. tons, which is 575 ths. tons more than in the first half of 2020. Cargo turnover of oil also increased by 283 mln. ton-kilometers, amounting to 793 mln. ton-kilometers.

According to the group of companies «Batumi Oil Terminal» LLC the volume of transshipment of oil, petroleum products and gas for the reporting period amounted to 726 ths. tons, which is 317 ths. tons more than in the same period of 2020.

To consumers of Atyrau and Mangystau regions of Kazakhstan through the «Astrakhan-Mangyshlak» water pipeline, «Main Waterline» LLP supplied 14 mln. 74 ths. cubic meters of fresh water, the decrease in the volume of water supply compared to the first half of 2020 amounted to 329 ths. cubic meters.

«Batumi Oil Terminal» Ltd (BNT) - a subsidiary company of «KazTransOil» JSC (100 %). Direct ownership and management of production assets in Georgia is carried out through BOT.

«MunaiTas» LLP – joint venture company of «KazTransOil» JSC (51 %) and CNPC Exploration and Development Company Ltd (49 %), created for the purpose of implementing a project for the design, financing, construction and operation of the «Kenkiyak-Atyrau» oil trunk pipeline.   For reference:

«KazTransOil» JSC – the national operator of the main oil pipeline. It is part of the «NC «KazMunayGas» JSC Groups. Owns a diversified network of main oil pipelines with a length of 5.4 thousand km. It transports oil to Kazakhstan refineries and for export in the following directions: Atyrau-Samara section of the Uzen-Atyrau-Samara trunk oil pipeline, transshipment to the «Kazakh-Chinese Pipeline» LLP system (Atasu-Alashankou oil pipeline), Aktau port (oil loading into tankers), transshipment to the Caspian Pipeline Consortium-K JSC system, oil loading into railway tanks at the Shagyr Oil Refinery and the T. Kasymova. The production facilities of «KazTransOil» JSC are located in Mangistau, Atyrau, West Kazakhstan, Aktobe, Pavlodar, Karaganda, Turkestan, North Kazakhstan regions, Nur-Sultan, Almaty and Shymkent. 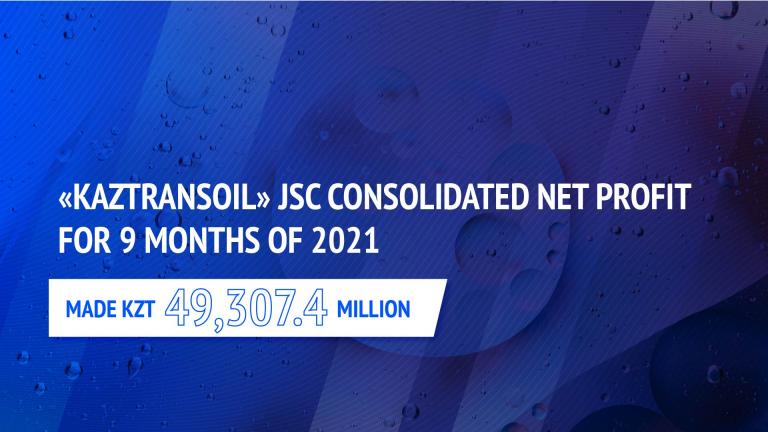 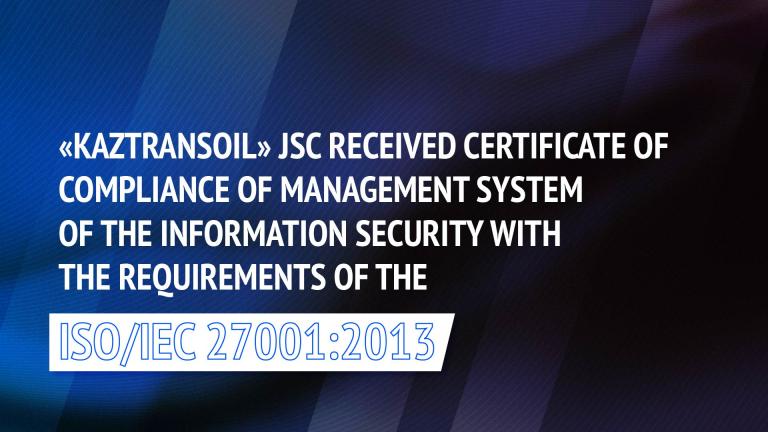 «KazTransOil» JSC received certificate of compliance of management system of the information security with the requirements of the ISO/IEC 27001:2013
More details 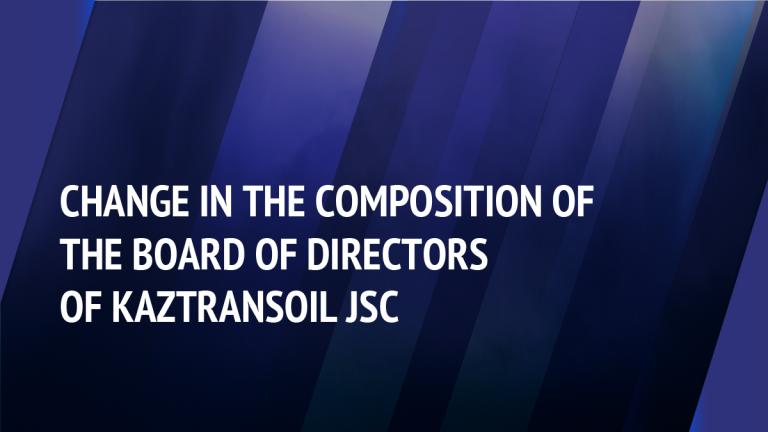 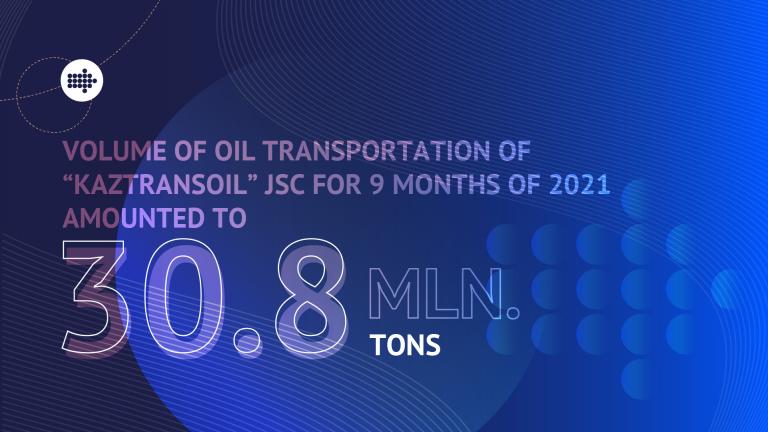 Volume of oil transportation of «KazTransOil» JSC for 9 months of 2021 amounted to 30.8 mln. tons
More details
What are you interested in?