One of the main tasks of the Ombudsman is to assist in resolving labor disputes, conflicts, problematic issues of social and labor nature, as well as compliance with the principles of corporate (business) ethics by the employees of the KazTransOil JSC.

The main duties of the Ombudsman are: to advise the employees, participants of labor disputes, conflicts and assist them in developing a mutually acceptable, constructive and implementable solution in compliance with the laws of the Republic of Kazakhstan and, if necessary, the principle of confidentiality; to assist in solving problem social and labor issues of employees, as well as in compliance with the principles of corporate ethics by employees; to explain the provisions of the KazTransOil JSC Code of Corporate (Business) Ethics to the of KazTransOil JSC executives and employees when they apply, and providing advice on ethical issues.

The term of powers of the Ombudsman of KazTransOil JSC Serik Ishanbekovich Akbergenov was extended for 2 (two) years from November 1, 2021, in accordance with the resolution of the Board of Directors of KazTransOil JSC dated October 15, 2021 (Minutes of the Meeting No. 9/2021). 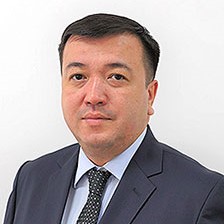 Aqbergenov Serik Ishanbekovich
Ombudsman of «KazTransOil» JSC
Officials, employees and stakeholders of the KazTransOil JSC have the right to contact the Company's Ombudsman using the hotline: In addition, appeals in hard copy can be sent to the Ombudsman of the KazTransOil JSC at the address: 20 Turan Street, entr. 12, 010000, Esil district, Nur-Sultan, with a note on the envelope (package) «To the Ombudsman of KazTransOil JSC», which shall be passed to him without being opened.
The Company does not have any obligation to provide interested persons the documents legally translated into English or any other language. Documents posted on the website in English, are not legal translation.